Punk rock templates let you go into this protest subgenre of rock.

Typical punk rock instrumentation is stripped down to one or two guitars, bass, drums and vocals.

The early punk bands emulated the minimal musical arrangements of 1960s garage rock. Songs tend to be shorter than those of other rock genres, and played at fast tempos. Most early punk rock songs retained a traditional rock 'n' roll verse-chorus form and 4/4 time signature. However, later bands often broke from this format.

The vocals are sometimes nasal, and the lyrics often shouted in an "arrogant snarl", rather than conventionally sung. Complicated guitar solos were considered self-indulgent, although basic guitar breaks were common. Guitar parts tend to include highly distorted power chords or barre chords, creating a characteristic sound described as a "buzzsaw drone". Punk rock lyrics are typically raw and combative, and, in contrast to lyrics in other genres of popular music, they frequently address social and political themes.

All of our Logic templates Cubase templates and Ableton templates from DAW LibrarY are created using only DAW built-in tools and plugins. This eliminates compatibility issues with plug-ins and tools from other manufacturers. We use audio tracks for vocals and FX in our templates. All synthesizers and sampler instruments are on midi tracks and can be edited or replaced with other instruments. Our punk rock templates are created using the latest versions of DAW.

All DAW LibrarY punk rock templates can be freely edited: modify any sound, all synthesizer parameters, chords, melodies, and more. 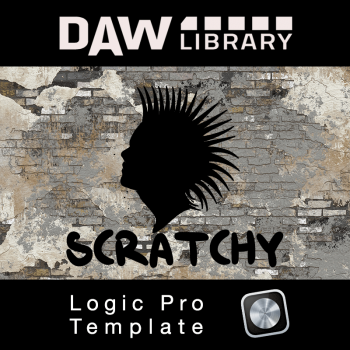 Enjoy the sound of the " Scratchy " punk rock Logic template in the style of blink-182 !